The Virtualities of Political Technology: Some Reflections about the Northstar Campaign System

Canvassing for the Republican National Committee in the 2008 election, Andrew Northwall noticed Obama staffers knew an awful lot about voters, even those flown into the campaign. He discovered that Democrats had better data about voters ready at hand through their digital infrastructure (Kreiss, 2012). A few extra details meant a better rapport on the doorstep and better odds of connecting with voters (Nielsen, 2012). The success of the Obama campaign lingered with Northwall and his fellow Republicans long after the election, enough that he decided to create better technologies for right-wing campaigns in the United States. Andrew Northwall’s efforts resulted in Northstar Campaign Systems (incorporated in 2011). It sells a campaign and issue management software to Republicans campaigns of all sizes. Its software has assisted over 70 campaigns in 17 states so far. In this post, I would like to talk about how software influences political campaigns through Northstar. I will suggest that it is important to pay attention to the software itself in order to inform qualitative studies of technology in politics.

I will use the case of Northstar to explain what I mean by virtualities and how it opens new lines of inquiry into political campaigns’ adoption of technology. Where Anderson and Kreiss (2013) explain that campaigning practices are made durable through software, I would suggest this durability is not always wholly integrated from campaign to campaign. I call this gap between its contextual uses and its total features the virtualities of software (Deleuze, 2007) (or what Latour (2005) would call plasma). The durable, in other words, exceeds the actual. Studying software offers a way to consider the virtualities and the actualities of the campaign by considering what merges and what does not merge. Virtualities might actualize to become mundane, the next “killer app” or get ignored altogether. Software could just as well create new problems as well as solve old ones.

I’d like to use the case of Northstar then to test this method of investigation for the virtualities of software. I’ll consider how its features and functions raise questions to its users. Three questions come to mind: its database, its network and its forms of voter contact. These questions seek to understand how the virtualities of the software either actualize or linger in the campaign assemblage. 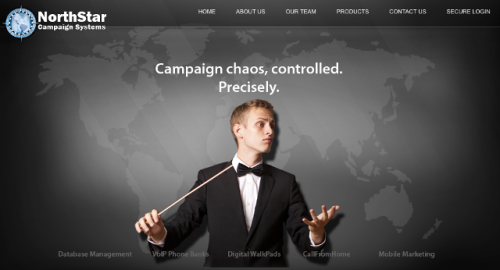 An advertisement of Northstar Campaign Systems

Northstar promises “campaign chaos, controlled. precisely” as seen above. I couldn’t help but be curious about any software promising greater control. It suggests that software will help navigate the unfolding of a campaign by creating a system of control (such as ‘computational management’ or ‘managed citizenship’). What are the virtualities of this system of control?

Controlling campaign chaos involves better record keeping. Northstar arrives with a set structure of its record-keeping that must be merged into the campaign. Like many campaign management systems, Northstar is the front-end of a database that logs, stores and retrieves campaign activity. The Northstar database works by organizing campaign record keeping and, more abstractly, its memory. Campaign memory, however, endures in many ways outside of the database through staff, paper and spreadsheets. What default records does Northstar software include that have been merged into the campaign or discarded? How does the interface mediate access to this memory? How do people find data during the everyday tasks? Do they succeed in finding necessary data or do bugs, quirks or obfuscated code thwart their inquiry?

Northstar mostly collects data related to the voters. For example, it keeps track of where voters live, their past donations, and even if they have a yard sign. Voter records also track campaign correspondence as the software can record whether a voter requires feedback and who has been delegated to respond. Over the course of a campaign, workers populate a database with thousands of unique pieces of data about voters that can then be searched, aggregated and fed into other tasks like walk books for canvassing. What default fields populate or get ignored? I was curious about Northstar’s lawn-sign feature for example. Each voter record includes a field to record if a voter wants a yard sign in addition to a map that tell workers where to put the sign and remembers where the sign’s location. Does the sign detail of a campaign use this feature? Why or why not? Asking questions beginning with the sign field opens up questions about what parts of the campaign operate within the purview of the software system and whether software features meet the needs of its adopted campaign.

The left side of the screen lists the type of information collected on voters.

Merger also negotiates the desire of the Northstar software to record all campaign activity with the habits of the campaign itself. Northstar includes an imperative to consolidate and integrate data into a common system. It may seem commonplace, but systems like Northstar, promise a convergence of all activity in one database. The question for the campaign then involves whether this convergence is either feasible or expedient. Does the desire of convergence and integration in Northstar influence the campaign? Does it lead to an intensification of their record keeping by promising to keep track of most campaign activity? When so much attention has been given to the influence of big data in politics, it would be helpful to know how campaigns themselves – especially local and smaller campaigns with limited budgets – resource their data collection.

In addition to the virtualities of the database, Northstar also creates its own ideal network that must be adapted to the campaign. The product connects VoIP phones, iPads, smartphones and browsers to a common database on servers run by Northstar. It allows distributed organizations to operate in synchronization by transmitting information across space and time. All these connections update the database in real-time, attempting to synchronize information to all parts of the campaign. Data entered on a tablet by a canvasser travels across the Internet populating a database that can then be accessed by the campaign office. This network must be adapted to the campaign. How does the network of the software integrate into the campaign assemblage? Questioning these virtualities offers an interesting way to study the nature of the campaign’s organization as an intersection of technology and the many other cultural practices as work in a campaign. 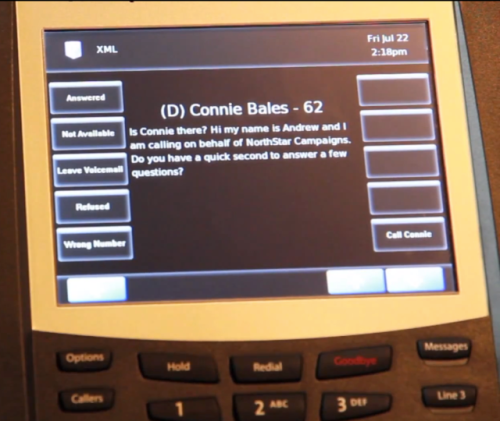 Finally, Northstar includes certain modes of voter contact, such as phone banking or telephone based voter contact. Phone banking is the most distinct feature of Northstar. The web interface allows a campaigner to select and assign a chunk of voters to a phone bank then assign a script to be read by callers. At the phone bank, these scripts appear on smart telephones with touch-screens. Campaigners read the scripts and punch in the responses that the phone sends back to the database. Phone banks optimize voter contact to ensure the best data for the campaign – similar to how Yates (1989) describes the memo as a technique of organizational control. The scripts, buttons and inputs guide staff and volunteers in their interactions with voters and ensure clean data input.

Northstar has an interface to builds scripts for phone banking. These scripts can include both variables, such as name, as well as branching trees so that users response will led to different questions.

An example of a script being developed in the Northstar Campaign System.

Further research could observe how campaigns write phone scripts using the Northstar interface. Do they use its branching structure? Phone banking scripts then could be understood both in their actual use in the campaign and in its virtualities of its scripting interface. Do phone scripts offer a different way to structure engagement? Could we compare this form of personalized communication to targeted web advertising or the A/B testing of website interaction?

These three virtualities of Northstar – its database, network and phone bank – hopefully demonstrate the use of attending to software itself as part of ethnographic work. Indeed, the questions I raise here beg an application in a study of a campaign using Northstar or a similar product. Understanding the virtualities mentioned might offer a new line of inquiry into the political influence of software. How does it merge with a campaign and more specifically, what features actualize in the campaign practices and what linger as virtualities?

Attention to the virtualities of software offers a way of developing questions for more extended ethnographic studies of campaigns and technology. Taking a good look at the software itself will not describe its influence on politics nor explain the materiality of campaigning, but it will help researchers post new questions about how certain features and functions of software influence the campaign after its been installed. These questions are pertinent to my future work on the flow of American software to Canada. Does American software inject new virtualities into Canadian politics? The Conservative Party of Canada uses MailChimp, for example, so we might ask along these lines: what features do they adopt, adapt or avoid? Does MailChimp influence their campaign?

I would like to thank Andrew Northwall and Pete Botkin for their openness and generosity in answering my questions about Northstar Campaign Systems. Also, thanks to Daniel Kreiss and Jill Piebiak for comments on an earlier version of this post.

Anderson, B. (1991). Imagined Communities: Reflections on the Origin and Spread of Nationalism. New York: Verso.

McKelvey, F. (2011). A Programmable Platform? Drupal, Modularity, and the Future of the Web. Fibreculture, (18). Retrieved from http://eighteen.fibreculturejournal.org/2011/10/09/fcj-128-programmable-platform-drupal-modularity-and-the-future-of-the-web/